On Saturday 1st February a small group of us made our eagerly anticipated visit to the Sculpture Gallery & Workshop of James Butler – one of today’s foremost figurative sculptors.

Whilst we did not get to meet the great man himself (he is recovering from surgery) we were more than well looked after by his wife Angie – an excellent orator, and, as you would imagine, so enthusiastic about his spectacular work – bringing the pieces to life with their history from idea to the finished product. We were given a tour of his workshop and gallery which contained examples of this work.

James has been a member of the Royal Academy since 1964; he is also a Fellow of the Royal Society of British Sculptors and a Member of the Royal West of England Academy. His many monuments and memorials stand in London and other UK cities and also abroad in Kenya, Zambia, Saudi Arabia, France, Singapore, Madeira and in the USA. His small and medium-size bronzes are in many private collections. 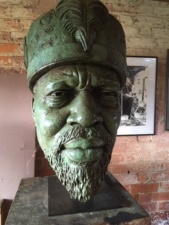 The 13ft bronze commemorative sculpture of the Queen beside the Thames in Surrey was sculpted by James who worked for 12 hours each day to ensure it was completed in time for the unveiling on the Anniversary of the Magna Carta. He has also created memorials to some sporting greats probably most famously the 9ft bronze statue of footballer Billy Wright which stands outside the Molineux ground.

Closer to home, some of you might be familiar with ‘The Stratford Jester’ which is at the top of Henley Street and amongst one of the most photographed statues 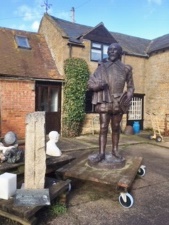 in Stratford!  One of the highlights of the visit was seeing the amazing life size statue of William Shakespeare, (pictured below) which is due to be unveiled in Stratford on 25th April to coincide with Shakespeare’s birthday celebrations.

The visit was arranged by our President to raise money for her Presidential Charity, Mary’s Meals.  With the tickets and further donations received, we raised £350 – with tax included that makes a grand total of £437.50 – feeding 31 of Mary’s Meals children for a whole year in school.  Watch out for further events planned – if they are anything like the visit on Saturday, we are in for a treat!