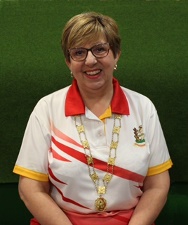 My thought for this month:

“Look for something positive in each day, even if some days you have to look a little harder”

So, we are in May already, and as I write this I am preparing for my tour to Scarborough.

My thanks go to all who are making the trip with me and to everyone involved in the organisation.

The outdoor season has started in earnest and we all enjoyed the SVP Gala at Lillington.  Thanks go to Lillington for their hospitality, County Officers for their delicious cakes, Carol for organising the games and to Donna for a great day.

Unfortunately we had to postpone the second marking session due to the trainer contracting Covid.  This will be re-scheduled for sometime in the Autumn.

The Skills session will be taking place in June, this is open to all ladies. If you haven’t got your name down and would like to attend please contact Donna Kerr.

April 20th saw the last coffee morning for now.  They will resume in the Autumn.

We raised £75 on this day and the money has been donated to the Youth Academy.

Overall we raised in excess of £650 over the Winter so my thanks go to all who supported us.

Happy Bowling to all of you

If you would like more information about our Association; how to join a Club; or how to start playing bowls just email: This email address is being protected from spambots. You need JavaScript enabled to view it. 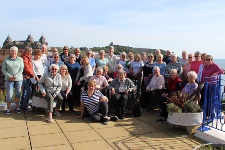 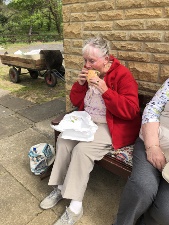 Chris Ward reports on the Annual Tour to Scarborough 1-5 May 2022 - that was after she finished her lunch!!

All aboard for our trip to Scarborough all 40 of us plus our noble driver, Neal, who appeared nervous at the thought of what he was taking on.

Our President, Debbie, greeted her ladies and after 3 pick-ups we were on our way.

We played our Representative Game en route at Driffield. The green was challenging but the hospitality we received far outweighed this. Debbie and her team took the winning rink but we lost the game overall.  We played at 2 different venues on each of the remaining 4 days, comprising 4 rinks on each green owing to the clubs having difficulty in getting players.  We had a great time every day winning some of the games and losing some. Every club gave us the warmest of welcomes and friendships were nurtured. There is one club that deserves a special mention and that is Sleights Bowls Club. We alighted from the coach to be 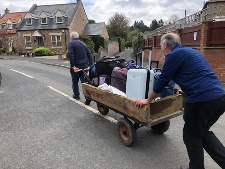 met by 3 gentlemen, one with a wheelbarrow and 2 with a  cart. We thought we might be mowing the green before our game but it transpired the gentlemen were there to put our bowls bags in their wheelbarrow and cart, taking them to the bowling green - pure gallantry. Warwickshire ladies most certainly appreciated the gesture. The weather was quite spectacular too in that we had heavy rain,hail, thunder and lightning and a very gusty wind.

We visited Pickering as well as Whitby. Both picturesque and the ladies certainly appreciated a bit of retail therapy.

On our homeward journey we stopped at Bridlington for 2 hours and in that time some of the ladies paddled, sunbathed, rode on the beach train, had coffee followed by an ice cream. The sun had got its hat on and it was bliss to feel warm after it being so cold earlier in the week.

We had evenings of glitter tops, casual wear, cocktail outfits and last but not least our theme for the gala evening was Musicals.  This was Debbie's choice. Some of the outfits were quite spectacular, the winner being Aleen Shuttleworth as Queen of Hearts. It was a terrific evening.

This resumé of the tour would not be complete without a mention going to Jenny Corn for her disco dancing. It is feared that Strictly has competition and will have to be on their toes next season - she is quite a mover once she gets going.  Thanks Jenny  for being such a breath of fresh air.

The tour was indeed a great success but it would not be so without a few thankyous:

Debbie for being an inspiration to all

A great time was had by all 😁😁

Sent from the all-new AOL app for